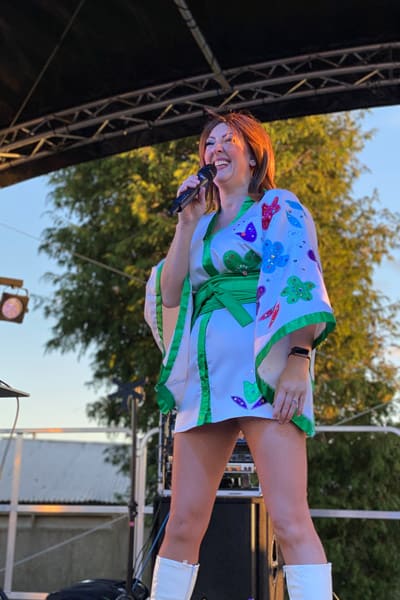 Sam started to sing at a very early age and from that moment on was hooked! She was part of various choirs as a young girl but singing and performing never became that serious until she reached the age of 21.

Sam has now been a professional singer for the past 20 years, performing both as a solo singer and as part of various bands, in which she has supported The Drifters and Boney M, and comedians Jim Davidson and Mike Reid to name just a few.

Sam is also well experienced in theatre and stage performing, she has been in numerous Pantomimes with lead roles as well as appearing in an episode of SKY ONE‘s Little Crackers as Anni-Frid from ABBA.

Sam has an unbelievable vocal range and is a fantastic performer who likes to add in a bit of light humour to every performance. Whatever the act, be it Abba, 60’s, 70’s, 80’s or Function/Party sets Sam is a major asset to ABBA Re-Björn and Star Tribute with powerful vocals and spot on dance moves.

Kelly is a multi talented performer, and a major asset to ABBA Re-Björn. Kelly trained at Elmhurst Ballet School from an early age. Not only can she sing, dance, act and choreograph many of our dance routines,she has also been a TV presenter and a producer. Kelly has spent many years working in live bands and musical theatre in the UK and on European tours. Her theatre credits include:

– Kate and understudy to Mrs Walsingham in Half A Sixpence (UK tour). Rusty in Footloose (European tour).

As a Choreographer, Kelly has worked for TED UK for their Sensatori Resort (Mexico), Oklahoma! (Edinburgh Playhouse), Magic of the Musicals (UK tour), several pantomimes for PHA and shows for the Rank Organisation (Corporate Entertainment).

On TV and film, Kelly appeared as Jemma in Escape to Paradise (Silver Touch Productions), Children in Need (BBC Newcastle), The Antiques Road Show (BBC), Islanders (CTV), and Wish You Where Here (ITV). She has also presented for BBC Live, CCW Wordzone and Sky Internet. 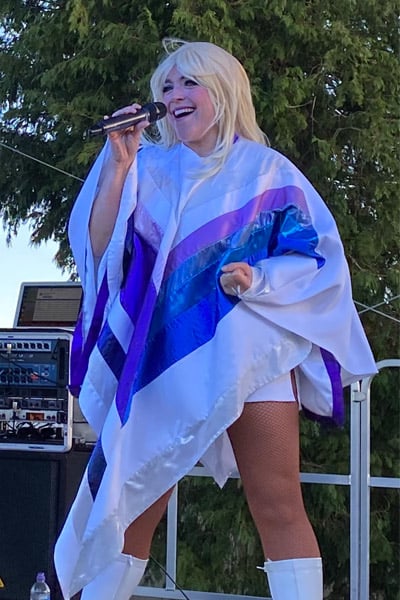 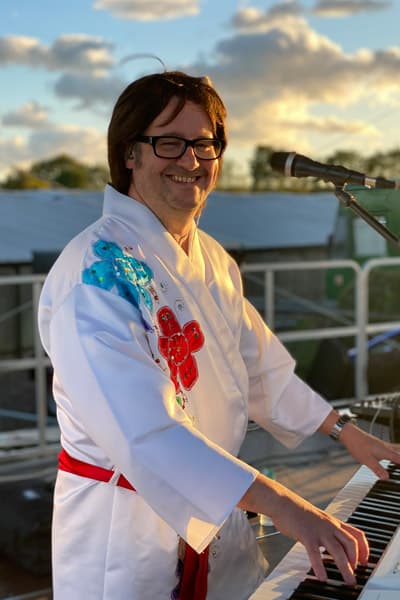 Toby was taught piano by the legendary pianist Big Joe Duskin, after a chance backstage encounter. He soon developed a keen interest in the piano from an early age which he has maintained to this day.

Toby has played piano with Mungo Jerry for the past 15 years, he has had 3 top 40 hits and a top 20 album with former Brit Pop band Rialto. Toby has played previous tours with Katrina and the Waves and Go West and has appeared alongside Ben Waters, Charlie Watts, Booker T and the MG’s and Status Quo to name a few.

Toby is also a qualified Music Therapist, and when he isn’t gigging, he works with children and adults with learning disabilities.

Marcus started playing guitar at the age of 9, he was self taught with the help of music books.

He played his first gig at the age of 17 in an originals rock band.

In his 20’s he played in numerous cover bands, mostly rock and pop bands.

Marcus was lucky enough to have his own recording equipment at home, so writing and putting ideas to tape was great and easy to do.

He went on to study guitar at ACM in Guildford and in early 2000 joined a hard working club band and played all over the UK.

He joined his first Abba tribute band in his mid 30’s and toured all over Europe with them.

In his 40’s he lived in Australia (Brisbane) where he studied audio engineering. Shortly after that he picked up a guitar job for a company where he played in 3 different shows, an Eagles tribute, a Bee Gees tribute and of course an Abba tribute! The band toured in Australia, New Zealand, South Africa and Canada. Most of the venues the band performed at were theatres.

Marcus returned to the UK in 2012 and has since played in several Abba tribute shows.

Marcus loves to write his own songs but equally loves performing to a different audience every week as Björn! 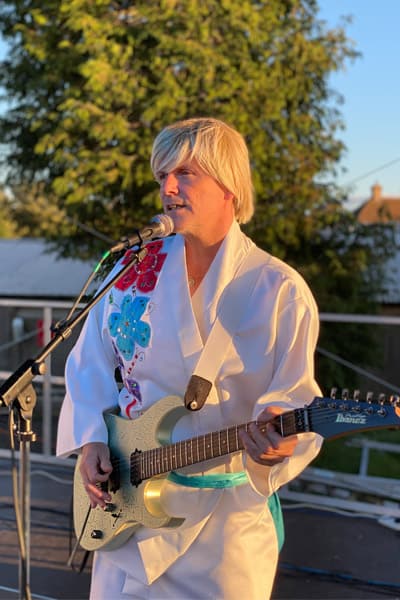 Take a chance, with us?

This website uses cookies to improve your experience while you navigate through the website. Out of these, the cookies that are categorized as necessary are stored on your browser as they are essential for the working of basic functionalities of the website. We also use third-party cookies that help us analyze and understand how you use this website. These cookies will be stored in your browser only with your consent. You also have the option to opt-out of these cookies. But opting out of some of these cookies may affect your browsing experience.
Necessary Always Enabled
Necessary cookies are absolutely essential for the website to function properly. This category only includes cookies that ensures basic functionalities and security features of the website. These cookies do not store any personal information.
Non-necessary
Any cookies that may not be particularly necessary for the website to function and is used specifically to collect user personal data via analytics, ads, other embedded contents are termed as non-necessary cookies. It is mandatory to procure user consent prior to running these cookies on your website.
SAVE & ACCEPT